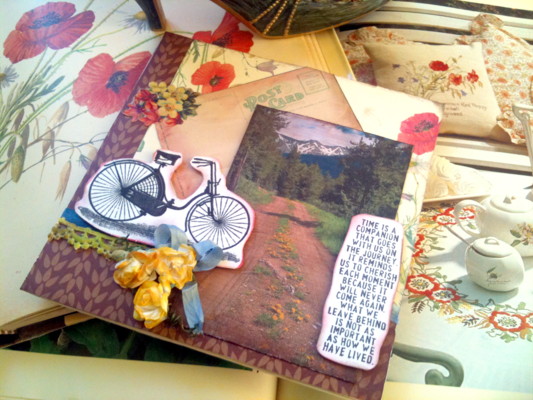 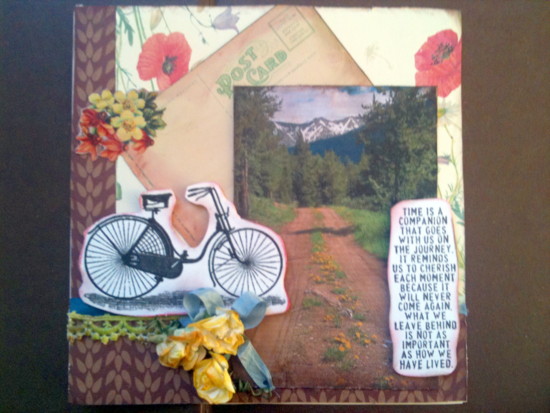 This card is like the song Country Roads. The road is very American but still something every one can relate to who has ever driven or walked down a dirt track as we Australians say. It has been a long time since I've walked a country road. Longer again since I've rode a bicycle. I suppose it is never too late to try both again.

The papers are a mix from my stash - kaiser craft and a freebie pack from an old magazine. The post card image and tiny scrap flowers are from a book called Transport by Instant Memories. The bicycle is a free digi-stamp from Tidbitstrinkets . I printed it out, added it to some card and then cut around it. After that I inked the edges up in a red to match the poppies in the background. The country road image is a feebie image from Old Photo Album Once again I printed it out, added the image to some light weight card and inked the edges. The 'Time is a companion' is a stamp from Tim Holtz stamps. I did the same for the stamped images as for the bicycle digi-stamp.

Lastly for a vintage touch I used some old lace trim and inked it up in a green to match the photoimage. I also added some blue hand dye silk ribbon. Then some white paper flowers were inked up in yellow to match the flowers in the picture.

I think it might be nice to take some photographs of my own and see if I can do the same as I did with this card.